The Chicago Board of Trade (CBOT) Historical Seat Analysis

The Prediction I made in 2002 has come true!

The seat prices are now 2.6 Million!

Navigation area for this web page

Charts comparing volume and seat prices, past and present era's

Q: Why create an analysis on the CBOT seat prices and project the analysis into the future?

A: The Commodity Futures Trading Industry is undergoing monumental changes. Many think the industry is doomed. I beg to differ. One way to argue the doom scenario is an analysis of, what was, the biggest Futures Trading Exchange in the world, The Chicago Board of Trade (CBOT).  Lastly, I think the analysis is a microcosm of a bigger picture. That picture is the economy itself.

Q: What exactly are you analyzing?

A: In the analysis I look at two key measures of the health of the CBOT,

1. The volume of trading (interest)

2. The memberships' confidence in the exchange (seat prices).

Volume is the most important figure. It often leads seat prices. Which indicates that the seat prices are a lagging indicator. Therefore, I must look to the ratio of volume to seat price to determine the best time to buy a seat.

Q: Why do you talk about generational theory?

A: One aspect of generational theory is the cycles they produce. The key cycle that will effect the CBOT seat prices and the economy itself is the generation that has fully occupied a the age location 21-41 years of age. In 2002 Generation-X fully occupied this age location. Let's move on to the study.

Looking back to the 1901-1945 era, the market averages that were closely watched were the:

All three indexes are mimicking the most watched indexes today, which are the DJIA and the NASDAQ. I equate the SPRTI and SPAI collectively to the NASDAQ of today.  The reason being, is that the SPRTI and the SPAI were measurements of the 80-year invention cycle, the auto,  80 years ago. Today, the 80-year invention cycle is the Internet/Computer and they are measured by the NASDAQ and the DOW.

These indexes match each other very closely. Especially  when comparing:

(see Strauss and Howe for more information on generational theory)

Based on Strauss and Howe's' work, there are four generational archetypes that repeat over and over again, every 80-85 years. These archetypes are always born in the same order. (except for the Civil War era).

When a generation is born it's given a name to go along with its archetype. Lets look at today's generations.

If we were to look back in time at all generations in US history it would look like this:

Charts comparing volume and seat prices, past and present era's

The chart below compares the highest price paid for a seat from 2, twenty-year spans, in the years specified on the chart.

This next chart compares the highest price paid for a seat and the volume, in the years specified on the chart

The chart below represents the price of a seat divided by the volume.

The quotient is represented as a percentage. The higher the percentage the better deal you are getting

The chart below compares the highest price paid for a seat versus volume, in the years specified on the chart

The chart below represents the price of a volume divided by seat price. The quotient is represented in dollars. The higher the dollar price the better deal you are getting

We must revisit generational theory to get to the payoff.

We must look at a key issue called the 'phase of life' that Strauss and Howe created.

As mentioned before, the 4 generations are always aligned in the same order. Each generation can be placed in a phase of life stage also.

Today's generations are aligned as follows.

When the generational constellation lines up, as it is today, something happens.

If we look at the data in regards to the CBOT, the last time we lined up, generational  like this, was 1922.

The main driver of the seat prices is the Reactive generation (Generation-X). The Reactives are risk takers. They tend to over pay for everything from houses to stocks to seats. (click last sentence to go to my research page and see the housing study).

The Reactive generation did it before and my estimates show they are and will do it again. 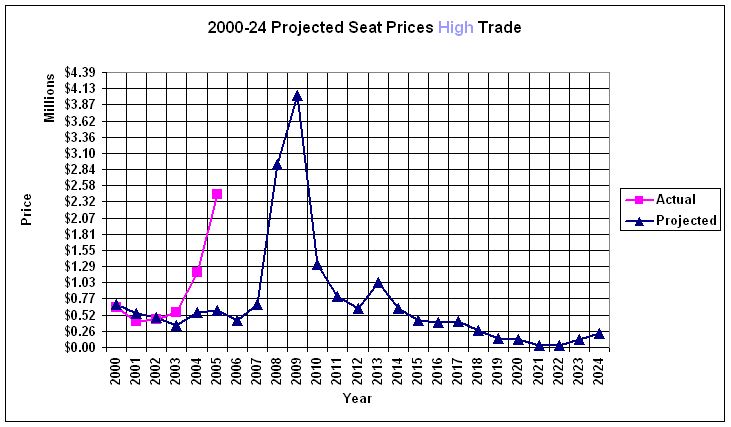 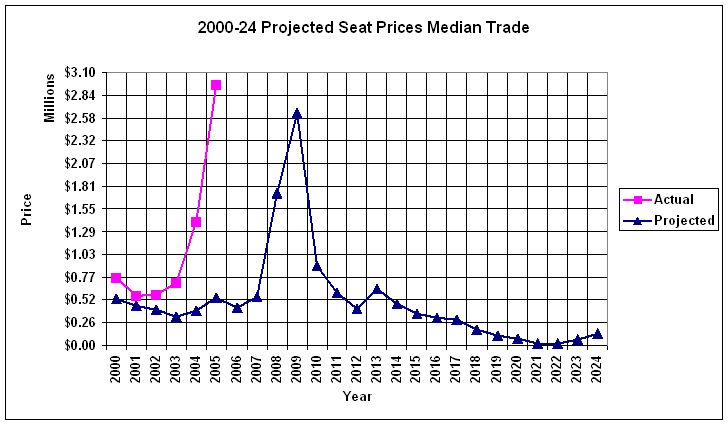 Chart of Low trade has been removed since the seat prices surpassed the low trade price of 1.3 Million.

(Look below this article for a recent update)

They all said I was out of my mind.

A couple of questions have popped up about this study and I'd like to address one.

Q: "There's no way the CBOT seats are going to 4 million."

A: The CBOT Seat Analysis study was based on historical data from the CBOT. The data is from an era when the CBOT was the biggest commodity exchange in the US. However, that's changed. The biggest exchange in the US now is the MERC. The 4-million dollar seat price could very well happen at the MERC and not the CBOT.  The seats on the NYMEX are over a million right now. Maybe it'll be them.

I'll state this though, the CBOT seats will go to at least the projected low of 1.3mm.

The point of the study was to show that the industry, albeit in bad shape, was still healthy and it wasn't the first time the industry faced extinction. The key was looking at the volume and generational theory.

By looking to the past, we can see the future. Both key measures,  the trading volume compared to seat prices, and the generational archetype dominating the industry, have shown this to be true so far. Have a look for yourself. The updated charts are below.

What's been happening to the CBOT seats?

What about the Merc seats?

Here's a little story from Bloomberg:

A full membership conferring rights to trade all contracts at the exchange fetched $945,000 on Oct.8,  more than twice the $432,500 a year earlier. Each full-seat holder will get 27,338 shares in the Board of Trade after it becomes for-profit.

Based on its seat prices, the Board of Trade is valued at about $1.7 billion. The Merc's market value is about $5.6 billion.

The Merc's most expensive seats sold for $430,000 each before it became a shareholder-owned company in 2000. After the IPO two years later and a more than fourfold increase in its shares, those seats are valued at $3.4 million.

Well if I do my math correctly, that puts the CBOT seat at 1.8 million, when they go public.

The CBOT has initiated the move to go public. This will assure that my median prediction of 2.75mm will come true. I will update throughout the year, inserting the figures for  the seat prices, in 2005. I've updated the charts through Feb. However, when the CBOT goes public, the price of the stock, that the full members recieve (for free) will go into the equation. This will catapult the price higher.

The numbers speak for themselves. I was right.

Some folks have sent emails requesting an update on the seat analysis. I replied that I don't intend to update the study. I consider it over and have moved on to other things. The intention of the study was to prove that generational theory can be used to predict many things. Strauss and Howe's discovery is nothing short of spectacular. I've studied their work for almost a decade. Their work easily can predict coming events within our society and can be used to show how events will not escalate too. For instance the following story was front and center in May of 2002:

12 Million Could Die at Once in an India-Pakistan Nuclear War ... ;

Three million would die in "limited" nuclear war over Kashmir - 24 ...

I went online that day and stated, on the Chicago Board of Trade Member web site, that this would not come to fruition because Strauss & Howe's "Turning's  Theory" stated that it wasn't time yet. Not an easy prediction to make when everyone is screaming "Nuclear Nightmare". At the time, most were convinced they were going to let the nukes loose. I knew they wouldn't and stated that they wouldn't to my peers.

The CBOT seat study is over as far as I'm concerned. However, I'll leave you with these thoughts; as much as the seat price went up...it will retrace its steps as I showed in the original charts, above within the study. Think how easy it would be to make money on THAT prediction. Mmmm...how about some Put options on the CME, in about 2 years? Or some LEAPS, now?