DOWNLOAD appendix A & B which are missing from the ebook

Also, visit my Generations page. It shows the graphs, in both appendixes, in color.

It's been over 7 years since I finished Winter is Coming. Some of my predictions were wrong, some were right. However, the most important prediction was correct. That prediction was to get out of the market at the end of 2008 because a debt crisis would ensue.

I want to address two things in this new introduction. The first concerns some advice I've given my friends since the credit crisis began, in the fall of 2008. The second looks at my predictions from 2003.

The following is a closely reproduced note I sent a friend of mine. He asked me a simple question, "what should we do now that the crisis is here?"

The best advice I can give you is to anticipate what's going-on in your industry. Ask yourself some questions, like, are there threats to your job being outsourced or severe cutbacks to your company due to lack of business? Will your industry be hurt by Austerity (government budget-cuts and layoffs)?

Do you have a pension at your company or government job? Is it under-funded? If it is, don’t plan on getting 100 cents on the dollar. It’ll be more like 50 cents on the dollar. Whether your pension is in the public or private sector, you can retrieve the information you need to determine if your pension is safe (fully funded and insured). Don't be in denial, face the fact that we got screwed (again) by the elite and now you and I need a plan. Stay out of, or, pay down debt as quickly as possible because deflation is debt's enemy. Money is worth more tomorrow than it is today, so people save more. We grew up knowing the opposite of that which was inflation. In an inflationary environment money is worth more today than tomorrow.

Your salary has a good chance of getting cut but your debt level will stay the same (at the very least, you will not receive a raise). Furthermore, the Federal Reserve's  devaluing of the US dollar will send the price of the products that we need to survive, like Oil, corn, and metals etal higher.

We are in deflationary times and it isn't going away, I don't care how many $s the fed prints. If you have a mortgage, refinance because rates are low. If you can, purchase a 15 yr mortgage not a 30 yr. If you think your house will grow in value over the next 15 years, like it did in the 80s, 90s and early 00s, it won't. There aren’t enough people to buy the inventory. You can see a picture of this in the housing study I did, back in 2003, on my website, here: http://www.jamesgoulding.com/Downloads/Housing.xls

In the end of the book, The Fourth Turning, written in 1997, Strauss and Howe wrote an entire section called "How to prepare" for the coming "Winter era" (that they correctly predicted). I highly recommend it. [That ends the note I sent to my friend with the advice on how to handle this Winter era.]

Secondly, I'd like to address the two predictions, from 2003, that I got wrong. The one I take the most heat for is that I predicted either the Dow Jones Industrial Average (DJIA) would trade 35,000, or, in 2009, the market would crash. Therefore I advised that people should be out of the market at the end of 2008 no matter where the DJIA was trading because the stock market’s value would be cut in half.

We now know that the crash came first and the DJIA topped out at 14k, and then broke down to 7k. When that occurred, all the wealth in the US was cut by a substantial percentage. We had an economic crash and the size of inheritance and household net worth was cut by a huge amount. Now, in 2011, the tax laws will change. As a result, the surviving generations will soon be receiving less than projected. The stock market will be stuck in a range for the next decade. I missed DOW 35k but correctly predicted the market being cut in half.

The second thing I missed was the beginning of the 4th Turning (Winter). I thought it began in September of 2001 because of, 9/11. I remember sitting across the table from Neil Howe, back in 2003, when he asked me if I really thought we'd entered Winter. I told him I thought we had. He said we hadn't and 9/11 would turn out to be a spark that fizzled. Now we know he was correct. However, we both concur that the Lehman bankruptcy was the beginning of Winter. The most important evidence is society's response to the crisis. They've responded to the credit crisis by changing their collective behavior, from shopping, to saving money. After 9/11, nothing changed collectively that lasted for more than a few months and the country splintered into factions after the invasion of Iraq. That is not the recipe for a 4th Turning (Winter).

I intend on writing a book called Winter is Here. However, I'd like to write a sequel to Nano. I can't decide. We shall see.

Lastly, thank you for purchasing my book. I sincerely appreciate it.

Winter is coming, tells the story of a crisis era called Winter. This crisis is just a few short years away. The work in this book is based on two generational theorists, William Strauss and Neil Howe. The book also includes economist Harry S. Dent's work.

You'll want to read this book if you want to know, why and who is forcing the coming crisis. How the crisis era cycles through American History arrive like clockwork, yet, they shock everyone when they come

Learn how reoccurring financial, war, generational, and political cycles contribute to our history and shape our future.

Winter is Coming is short, concise and a great introduction to the brilliant work of Strauss and Howe.

Society experiences a catalyst that shocks everyone out of an individualized stupor. Suddenly focus is shifted on a national level. This focus shifts attention from internal, national problems to outer, world problems. World problems that were once ignored by the people in this country come to the forefront. It’s as if a collective mind turns its attention to what is going on outside this country.

Vietnam wasn’t anything like Iraq in 2003. Not even close. Wars in a 4th Turning  (Winter) are total. S&H go on to write, "Crisis-era wars were all large, deadly, and decisive. Home front resolve conformed to the visions of the elder leaders, and the outcome totally redefined the kingdom, nation or empire."[1]

What Gen-X knows is that things are about to get messy. Revolutionary messy. And, I am not talking about Boomers shaking their collective fists at their G.I. fathers. I’m talking about all-out massive societal chaos. One question still stands: When is this all going to happen?

Idealist generations are terrible at making collective decisions. That fact is going to make or break us when the crisis sparks. The Idealists’ history as collective thinkers when making decisions about our future while in complete control of the political landscape is terrible, the worst incidence being the Civil War. The Civil War is an example of a Winter era gone bad.

Of the seven-million Gilded men who reached combat age, ten percent died in the War. That casualty rate is equal to eight times WWIIs. Of the remaining Gilded men, five percent of them ended the war in “disease-ridden” POW camps.[1]

The G.I. generation shifted billions and billions of government money away from every other generation alive when they were in political power. They held the White House for thirty years with nine U.S. Presidents. They held Congress 1953—1975 and barely gave up control in 1977, as they held onto 47% of the power.[1] They ran on the majority ticket twelve straight times 1944-1988.[2] During these years, they made sure that their generation was taken care of. Unfortunately, they did it at our expense. 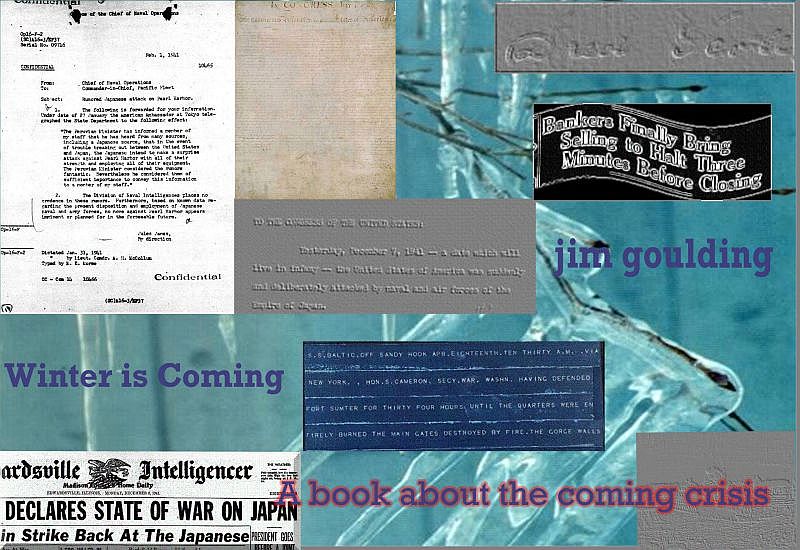 The final process for putting the cover together was taking picture 22 and pasting all the other pics onto it. I built it in MS Picture It! 99, because the program is great for making collages. I laid the final pic over itself to give it the affect you see in the final product, which can be seen at the very beginning of this document. Thanks for your interest in the creative process of making the cover of Winter is Coming.

Reading the Declaration of Independence from the east balcony of the State House in Boston. 1776. Illustration. 148-GW-ll4I. (revolutionary_war_023.jpg)

How to cite FDR library (all photos are in public domain)

http://www.worldnewsstand.net/msc/Pearl.htm (cite with this page also.)

Civil War pix compliments of the Library of Congress

Battle of Lexington. Drawing from engraving by Amos Doolittle, a Connecticut militiaman. 111-SC-92639